Amanda's Story
Posted by Kathy at 3:13 PM No comments: 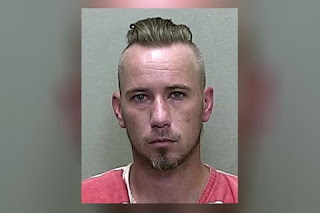 Marion County sheriff’s detectives are asking any other potential child molestation victims to come forward.
Marion County Sheriff's Office detectives believe a 34-year-old man arrested Wednesday on child molestation charges may have abused other children as well and are urging any victims to contact them.
The suspect, Lt. Keith Mitchell Turner, was one of four Lowell Correctional Institution corrections officers accused by lawyers in the Aug. 21 beating of an inmate that left her paralyzed.
That incident is still under investigation, but following the arrest, Turner is losing his job with the Florida Department of Corrections.
"The Sheriff's findings in this case against Mr. Turner are abhorrent and in complete contrast to the values and integrity held by our staff," Secretary Mark S. Inch said in a statement issued Thursday. "We are moving forward with his immediate dismissal."
Turner had been employed by FDOC since 2004, except for a voluntary separation of 11 months in 2006 and 2007.
In the child molestation case, Turner is charged with sexual battery, lewd or lascivious exhibition, and two counts of lewd or lascivious molestation.
On Aug. 8, detectives said they received a report concerning sexual abuse after a girl told a family member about repeated abuse over several years that began around 2012, according to Turner's arrest report. The child was 6 to 8 when the abuse allegedly began.
While investigating the case, detectives learned of second girl he may have sexually molested.
They contacted the second person and confirmed that Turner had committed crimes of a sexual nature against that child, the report says.
Turner was being held in the Marion County Jail Thursday without bond.
During their investigation, Sheriff's Office officials came to believe there may be more victims.
As for the Lowell incident, the Florida Department of Law Enforcement is investigating the alleged abuse in which 51-year-old inmate Cheryl Weimar was severely injured. She and her husband have filed a lawsuit in the case.
The amended complaint cites "Turner's violent, threatening, and abusive conduct towards women based on dozens of inmate complaints against him" in describing him as a "risk to female inmates at Lowell CI."
"I'm just speechless," said John Vernaglia, an attorney with the Andrews Law Firm in Tallahassee, which filed the lawsuit.
"It's a very sad day, he said in a written statement. "Our thoughts are with the child victims as they seek to heal from this tragedy. I hope there is as much support for these victims as there has been for our client."
"I'm saddened that innocent children had to endure the abuses this monster inflicted, and I'm most happy with an arrest," said Debra Bennett, a former Lowell inmate who has organized protests in support of Weimar. She hopes Turner and the other corrections officers are arrested over Weimar's case.
Vernaglia said Thursday that Weimar — who was hospitalized for a time — is at an FDOC reception center in Lowell. Although Weimar is doing a lot better, he said, she is still "in a lot of pain." He is hoping to move her to another facility so her condition can improve.
Under Florida law, mug shots of law enforcement officials can be exempt from public records. This case, however, involves an exception, MCSO spokesman Sgt. Paul Bloom said.
"The need to find other victims and protect other victims outweighs any protection he's afforded," Bloom said.
Anyone with information on possible child abuse is urged contact Detective Ian Simpson at (352)3683586.

He has 100 plus pages of complaints of sexual abuse, physical abuse and on and on since 2010 and still he was promoted within Lowell.

Marshana's Story
Posted by Kathy at 12:02 PM No comments:

Dia spent 21 years in the Florida prison system.
Posted by Kathy at 5:09 PM No comments: 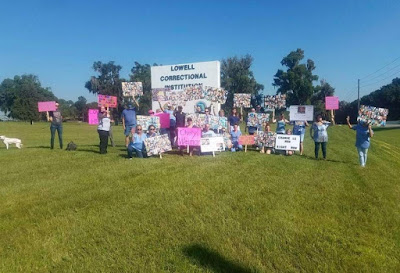 The first silent protest a Lowell 3 weeks ago. 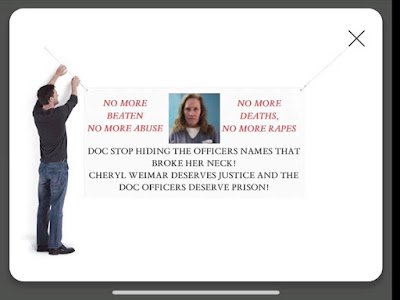 One of the banners for protest No. 2 at Lowell on Oct 19.  Many more women
have joined.  This was started by former inmate Deborah Bennett who spent over 20 years
at Lowell for having  oxy's.
Posted by Kathy at 10:45 AM No comments:

Rose was incarcerated at Lowell in Ocala.
Posted by Kathy at 10:04 AM No comments: